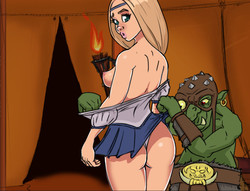 v1.1
Patched release that fixes a few things, most notable the game breaking bug that some players were getting with the Harem Girl Count.
Fixes
-Fixed the Game Breaking Bug where players were getting stuck after after collecting all the harem girls and not being able to progress (related to completing the quest “Whoregon Trail” last , BIG Shout out to Xyav from f95zone for doing the lion’s share of the bug hunting before I even knew it existed)
-Fixed some text running off the screen with worm
-Tweaked the Undead’s stats
-Fixed re-spawning items
v1.0
Initial release