In Sheroni Girls you get to play Lucy, a 18 years old human-hybrid, who is just about to finish her training. She has it especially hard because she is half human and can’t transform like all the other Sheroni girls but this doesn’t stop her to work as hard or even harder as everyone else to become a worthwile protector. On the other hand she is still a virgin and a prude and others might take advantage of her. Who are the Sheronis? Sheronis originally were inhabitants of the planet Sheron with a population count of 12,8 billion. In terms of physically strength they are as strong as humans, at least in their base form. In terms of appearance they can’t be distinguished from humans. Female Sheronis have a way to increase their strength and speed through a transformation. Male Sheronis however lack this transformation but they make it up with an above average intelligence. However, after a 3 years long planetary war against the Everáks, their population count went drastically down and their planet got uninhabitable. The few that survived fled to planet earth. That was 40 years ago and they are now living peacefully on earth. But they know that the Everáks are still out there and that it’s only a matter of time until their power craving race finds out about earth. Since they don’t want that their history repeats itself they formed something called the Protectors. Once a female Sheroni reaches the age of 16 she undergoes a training and gets prepared for the worst case scenarios.

1- Extract to desired location.
2- Click on “Game.exe” to start playing. 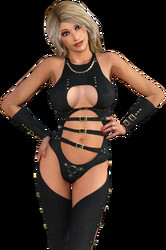 v0.2
New Content:
-Gallery added at the computer, you can rewatch every scene you have already seen and even get hints to scenes you haven’t seen yet (new savegame required)
-Continuation of the Main story, one new main quest, you can challenge the Master of the Dojo and other new stuff.
-Each class at school has several events now (still a lot more to come in future updates)
-Main Class Introduction + choices and dialogs with who you sit with
-Biology Class Introduction + first event with 4 different conclusions
-Art Class Introduction + first event
-Gym Class introduction + several events and a minigame
-You can now get promoted to cashier at the Diner job and earn more money (+new minigame)
-Added a lot of new NPCs, the town is much more lively now
-You can now take a bath to clean yourself and reduce stress
-Added some new dialogs with Lucy’s Mom
-A lot of new renders and a few new scenes
Updated Content:
-Reworked some of the characters and renders
-Updated the lost necklace sidequest and added a new choice after finishing the quest (involving Aaron, at the mine)
-Certain H-scenes get you dirty now and add a debuff
-Updated some older content so your new “companion” reacts to them
-Several Balancing changes (Some attacks cost less KI now, some items heal more, enemy tweaks etc.)
-Instant skill name changed to Stance
-Several spell and bugfixes
-Reduced game size significantly
-Other minor changes
v0.1.1
New Content:
-New Main quest added, first part of the third Challenge at the Ninjutsu Dojo added (with two different paths and some sexy scenes)
-New Area added, A.D. Inc Building with outeriors and all interiors
-New Area added, Idamville outskirt + mining area
-Sidequest at the Mine added
-Bulletin board with sidequests added (only 1 new sidequest so far)
-First mini-job at the Diner added (not much so far, promotions and other stuff coming soon)
-Maturbation Event at night added (if your Lust is high enough)
-A lot of new renders with some nice sexy scenes and some secrets
Updated Content:
-Important objects are now labeled (only the most important stuff is marked, you can still interact with pretty much everything else and find secrets, so exploring is recommended)
-Better pathfinding and reworked quest book descriptions (it should be much more obvious now where you have to go)
-Lucy got a new skin texture (never really liked the old one, has more details now and is in higher quality)
-More text and/or text improvements
-Other small changes and a few bugfixes